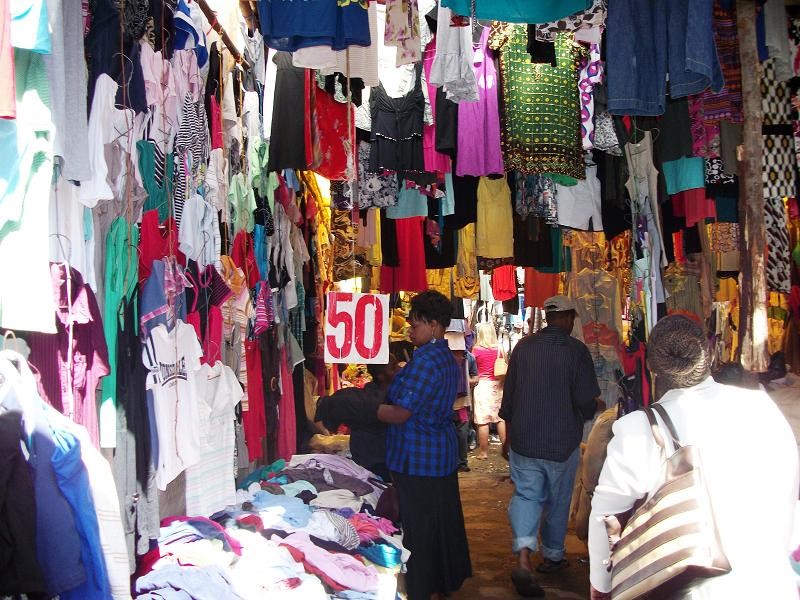 Nairobi has a real knack for fashion, and I have only been able to scratch the surface in understanding the complexity of Kenyan style and its roots. In the Central Business District (CBD), I have attended markets full of beautiful and uniquely patterned textiles called Kitenges which are an emblem of East African fashion. At these overwhelmingly colourful textile markets with multiple floors, you can buy your Kitenges and then conveniently move upstairs to visit a tailor. The tailors will create almost any clothing item that you could dream of, a masterpiece that is exclusively made for you. The textile industry has made huge contributions to employment and poverty reduction in Kenya and could play a key role in increasing Kenya’s capacities in becoming a middle-income country (Soko Directory Team, 2017). Despite the vibrancy and creativity of the Kitenges, the textile industry in Kenya has been declining steadily since the 1980s, and foreign countries including Canada could play a major role in its demise. 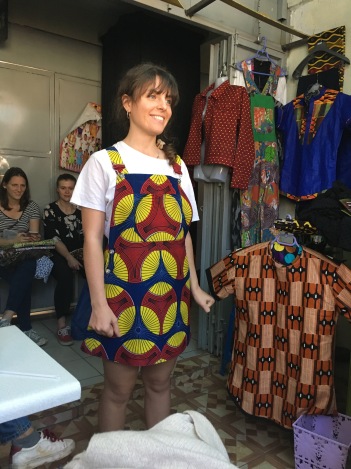 My friend, Pauline, trying on her costumized outfit made out of a Kitenge 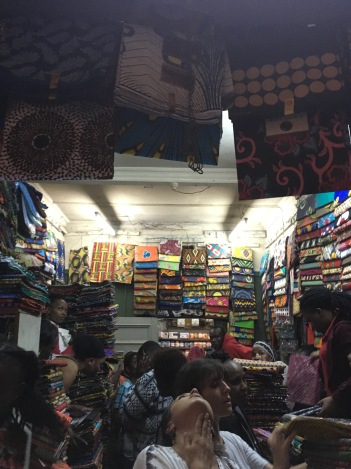 A shop filled with Kitenges

A huge piece of Nairobi fashion is found in second-hand clothing markets. Nairobi has many markets that are filled with second-hand clothes. The most famous ones are named Toi, Mutindwa, Korogocho, Engarasha, Muthurwa, and you can also find second-hand clothes laid on mats in the streets of the CBD for quick shopping. At these centers, there are swimming costumes, shoes, bags, jewelry, dresses, jackets, shirts, pants, and even undergarments. Toi Market is one the largest informal markets in the city and it hosts over 5,000 traders, exemplifying its fame (Nyanga, 2017). Due to my interest in thrift shopping and fashion, I put Toi Market on my “To Do” list for Nairobi.

Toi Market is a winding dirt road of stalls filled with a variety of second-hand items. The bustling energy of those shopping at the market is amplified by stall owners giving you prices and beckoning you to bargain with them. The market truly had everything, and each stall seemed to specialize in a specific clothing item. As I began sifting through large piles of clothing, I noticed familiar brands including Forever 21, H&M, Walmart, Old Navy and more. I knew that these stores were not in Kenya, which meant these second-hand clothes were not from Kenya.

After some research, I learned that Kenya is one of the largest importers of second-hand clothes globally. In 2017 alone, Kenya imported $133 Million USD in clothes from foreign countries inclusive to Canada, The United States, and Europe. These second-hand items arrive in Kenya through a process that I was naively unaware of. In Canada, when we donate our old, unwanted items to clothing bins or charity centers such as the Society of St. Vincent De Paul, Value Village, the Salvation Army or Goodwill, only twenty-five percent of the clothing will be sold inside the stores. The other seventy-five percent will either be repurposed for industrial use, or for commercial purposes such as car-seat filling, whereas the rest will be sold overseas to second-hand retailers in countries such as Kenya. Kenya imported close to $21 Million USD in worn clothing from Canada in 2017, edifying that Canada is a large stakeholder in Kenya’s second-hand markets (Jay, 2018).

The implications of the second-hand imports are highly complex, and so are the opinions surrounding the viability of the markets. The opinions on the importation of used items is polarized and contested, especially because citizens’ livelihoods are extremely intertwined with the business. Back in 2006, the negative repercussions of used imports were already recognized when over 12,000 Kenyans lost their jobs as textile centers began to close. Bama Athreya, the deputy director of the International Labor Rights Fund in 2006, stated that:

“There is no question that the second-hand clothing market has had a significant impact on domestic African clothing production. The tailors and the small producers have been put out of business. Those were good jobs for Africans and there are no jobs taking their place. This is a trade that feeds on the poor rather than benefits the poor,” (Mercola, 2017).

More recently in 2017, Kate Bahen, the managing director of Charity Intelligence Canada stated that “The textile industry in Kenya has been wiped out by our generosity,” and therefore believes that we should not be, “exporting our garbage to developing countries,” (Jay, 2018). Due to the increasing unemployment rate and waste from unsellable clothes, Kenya, Uganda, Tanzania, Burundi and Rwanda created a unified proposal in 2016 to ban the used clothing imports by 2019 to empower the local textile and clothing industries. However, due to pressure from foreign exporters such as the United States, the proposal was dropped (Mercola, 2017). This exemplifies the negative effects that the second-hand imports on the economy and the environment.

On the other side of the argument, there are clothing traders and importers that believe the used clothing industry improves livelihoods and builds the capacity of Kenya’s economy. For example, Planet Aid runs clothing donation bins in the United States to sell the used items to domestic and overseas retailers. They believe that selling the clothes to countries creates jobs and provides a source of affordable clothing for those who not have much to spend, stating that the retailers at markets such as Toi will, “sell or give away everything,” (Planet Aid, 2017). This statement on all the clothing being useful is not completely true since a portion of the clothing shipped to Kenya is damaged beyond use, therefore it ends up in a landfill (Jay, 2018). Despite Planet Aid’s blanket statements without empirical evidence, there are also micro-entrepreneurs in the second-hand business in Kenya that have been positively affected by the imports. For example, Emma Wairimu Kamotho has been a trader at Toi Market since 2013 where she makes a profit of $3,000 USD monthly and feels empowered as the owner of her own small business (Mbugua et al., 2018). In my own anecdotal data, I have experienced young, passionate women selling used and upcycled clothes in high fashion markets such as The Alchemist Sunday Market. Even though there is a positive outlook on the used clothing industries by importers and some micro-entrepreneurs, do the benefits of the imports outweigh the heavy costs?

This is a difficult situation that exemplifies the West’s overconsumption and its consequences. The vast amount of waste created by countries such as Canada, The United States, and Europe is being sold to developing countries, masked as a gift of generosity, thus making our waste the “beneficiaries” problem. Despite the negative consequences brought on by the extreme amount of used clothing imports, Kenyan citizens have been able to adapt and diversify their abilities through the selling and upcycling of second-hand items. This does not reconcile the unemployment of over 250,000 people in countries such as  Lesotho, South Africa, Swaziland, Nigeria, Ghana, Mauritius, Zambia, Madagascar, Tanzania, Malawi, Namibia and Kenya (Kubania, 2015). Moreover, it does not solve the increasing waste problem in Kenya due to clothing that is unable to be sold.

One small solution to this problem is for citizens in exporting countries to consume less and consume with intelligence. Elizabeth Cline, the author of Overdressed, believes that those in exporting countries must take responsibility for harmful shopping habits because the “consumer is at fault here,” (Jay, 2018). Cline also states that “We’re the ones that are buying too much stuff and then we want our unwanted things to somehow be good for the world,” (Jay, 2018). Regardless of what your opinion is on the exporting of used clothes to developing countries, North America has an overconsumption problem. Therefore, the process of helping others and our world should take a proactive approach by beginning before we decide to go shopping, as opposed to when we are deciding on what to donate. By the time that we have chosen to overconsume, it could be argued that the damage is already done.

Kubania, J. (2015, July 06). How second-hand clothing donations are creating a dilemma for Kenya. Retrieved from https://www.theguardian.com/world/2015/jul/06/second-hand-clothing-donations-kenya

Nyanga, C. (2017, November 14). Where to buy fabulous clothes, shoes for only Sh10. Retrieved from https://www.standardmedia.co.ke/evewoman/article/2001260126/where-to-buy-fabulous-clothes-shoes-for-only-sh10

Planet Aid. (2017). What We Do. Retrieved from http://www.planetaid.org/what-we-do/for-the-environment/what-happens-to-your-used-clothing

My name is Maegan and I am in my fourth year in the Global Development Studies Program at the University of the Fraser Valley. I have a special interest in infrastructure building related to roads, water and sanitation in developing cities. Furthermore, I am passionate about the process of urbanization in Nairobi, and how it affects food systems and infrastructure development. I am a QES Scholar working for the United Nations Office for Project Services (UNOPS) in the Partnership Development Office (PDO) for three months in Nairobi. My goals are to immerse myself in Kenya's diverse culture and activities, learn about the framework for UNOPS relating to building sustainable partners, foster practical development skills, and confidently contribute in any way possible to the PDO processes. View all posts by Maegan McKay

One thought on “Masked Generosity: A Narrative on Kenya’s Second-Hand Clothing Industry”